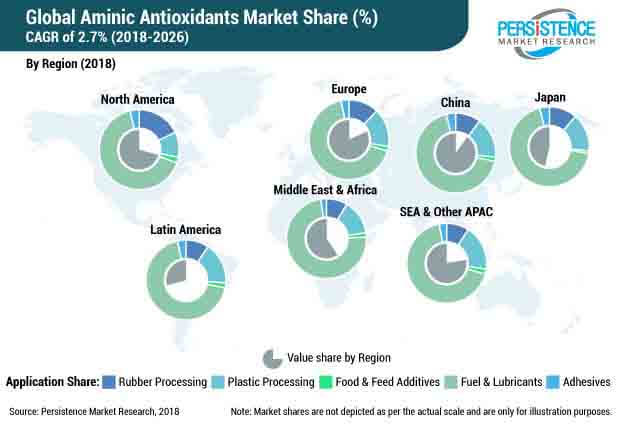 The consumption of aminic antioxidants around the globe is estimated to reach a value of US$ 1,500.4 Mn by the end of 2018, witnessing 2.6% Year-on-Year growth over 2017. Asia-Pacific, spearheaded by China, is anticipated to account for a significant share in the aminic antioxidants during over the forecast period. The South East Asia & Other APAC region is expected to grow at an above-average rate in the global aminic antioxidants market in the coming years.

Increasing preference of aminic antioxidants as alternatives for zinc dialkyldiphosphates is found to be a key factor assisting the aminic antioxidants market growth. Over the past few years, zinc dialkyldiphosphates have been utilized as additives in engine oil and lubricating oil, owing to their anti-oxidation and anti-wear properties. However, in the recent past, various environmental regulations have enforced the reduction of phosphorous content in engine oils, which necessitates an increase in the level of aminic antioxidants in order to make up for the loss of ZDDP’s anti-oxidation capability.

Among the segments by product type, market insights suggest that the butyl/octyl diphenylamine segment is expected to account for a significant share of the overall diphenylamine in the global aminic antioxidants market. The diphenylamine segment is pegged to be followed by phenyl-alpha-napthylamine and phenylene diamine segments. Diphenylamine possesses various advantages, which include suitability for inducing stabilization in automotive formulations such as automatic transmission fluids (ATF), passenger car motor oil, diesel engine oils and gear oils and excellent oxidation inhibition properties.

The global aminic antioxidants market is found to be partly fragmented, due to the presence of various local as well as regional players across the globe. Continuous innovation in products and emphasis on research & development are found to be the key strategies of prominent manufacturers around the globe.